Rise: A Pop History of Asian America from the Nineties to Now (MP3 CD) 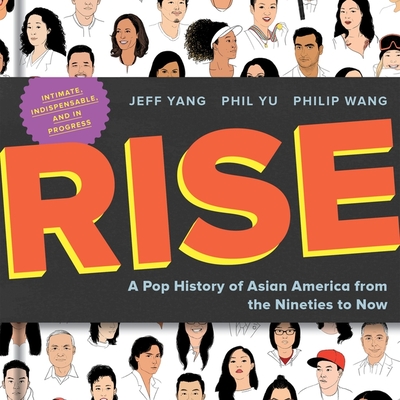 By Philip Wang, Philip Wang (Read by), Jeff Yang
$57.99
This title may not be available -- contact the store for help!

RISE is a love letter to and for Asian Americans--a vivid scrapbook of voices, emotions, and memories from an era in which our culture was forged and transformed, and a way to preserve both the headlines and the intimate conversations that have shaped our community into who we are today.

When the Hart-Celler Act passed in 1965, opening up US immigration to non-Europeans, it ushered in a whole new era. But even to the first generation of Asian Americans born in the US after that milestone, it would have been impossible to imagine that sushi and boba would one day be beloved by all, that a Korean boy band named BTS would be the biggest musical act in the world, that one of the most acclaimed and popular movies of 2018 would be Crazy Rich Asians, or that we would have an Asian American Vice President. And that's not even mentioning the creators, performers, entrepreneurs, execs and influencers who've been making all this happen, behind the scenes and on the screen; or the activists and representatives continuing to fight for equity, building coalitions and defiantly holding space for our voices and concerns. And still: Asian America is just getting started.

The timing could not be better for this intimate, eye-opening, and frequently hilarious guided tour through the pop-cultural touchstones and sociopolitical shifts of the 1990s, 2000s, 2010s, and beyond. Jeff Yang, Phil Yu, and Philip Wang chronicle how we've arrived at today's unprecedented diversity of Asian American cultural representation through engaging topics (including a step-by-step guide to a night out in K-Town, a note on historic Asian American landmarks, a handy Appreciation or Appropriation? discussion, and celebrations of both our founding fathers and mothers and the nostalgia-inducing personalities of each decade), plus essays from major AAPI artists, exclusive roundtables with Asian American cultural icons, and more, anchored by extended insider narratives of each decade by the three co-authors. Rise is an informative, lively, and inclusive celebration of both shared experiences and singular moments, and all the different ways in which we have chosen to come together.